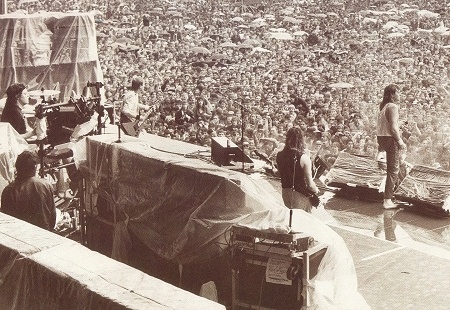 Rain or Shine – Kiss and Aerosmith Tour 2003 in Texas

🎸 🥁 🎤 With the gig going on hold and yesterday’s Spring Clean turning up some ticket stubs lost since the house move I thought I’d start posting some waffle about various past gigs as I remember them.
First off is the mighty Kiss in Texas in 2003 which they played jointly with Aerosmith. Three dates close together and chance for sightseeing sealed the deal. This was the 3rd time I’d been to the US in 4 1/2 months and US Immigration decided to invite me to a side room for questioning at Dallas Airport but they decided to let me in anyway.

First gig was same day as arrival which with time difference made for a long day. The gig was part of the Texas State Fair which is basically a giant version of the shows. Support band was Saliva who had just started when I arrived having had to show that I wasn’t carrying any handguns with this being Texas y’all. Their memorable song was Click Click Boom and they had that big Rock sound like Skid Row in their prime.
The venue was one of those bowl setups prevalent across the States with a seated covered section and a “lawn” area behind for the vast majority. Kiss were on next and still featured Peter Criss as it turned out a 3/4 original line up had been a contractual requirement. The Kiss curtain drop happened in the big Daltrey scream of Won’t Get Fooled Again which they still do 17 years on. Set list was pretty much a best of with no album to promote and featured all the usual flames, bombs, blood and thunder. Next was Aerosmith who I’d last seen in the more austere surrounding of Newcastle City Hall and were great also with Tyler proving himself surely the best US frontman on stage. Set ended with Sweet Emotion and fireworks.

Next day was sightseeing visiting Deeley Plaza and being accosted by all the roaries who hang about their with their Kennedy assassination theories before heading on to Austin and catching a great show which featured all the girl group songs of the 60’s.
Saturday headed off to San Antonio via 6 flags theme park which had some great rides and then a wander around the Riverwalk.
The venue was well out on the outskirts but another great venue memorable for the bloke in front getting inebriated and falling asleep despite the volume being deafening. Knowing the set list now I dashed out in the last song of Aerosmith’s set and beat the traffic although I managed to miss my exit and saw San Antonio variously get closer and far away as I tried to navigate in those pre Google map days eventually managing to end up in the “bad” part of town which was like a scene from Cops. Happily I lived to see another day.

Next morning it was off to Houston where the hotel was handily placed over a walkway from the venue. At this gig I was at the back of the covered section and unfortunately it absolutely pelted down for the whole of Kiss’ set and I basically felt like I’d been watching it in the shower ☔️ . This was also the gig where Peter Criss said “thank you Dallas” at the end of Beth which Paul Stanley tried to say he meant as a joke but was more likely because these guys flit around so much they had no idea where they are playing unless it’s written on the set list. With a 2 minute walk to the hotel I stayed for the full set and saw the Aerosmith entourage heading off in their limos immediately as the gig ended. I can honestly say my clothes were still wet when I got back to England from the thunderstorms.

Next day was off to Dallas-Fort Worth where having lounge access I thought I’d get a few beers but in one of strange US liquor laws I has to ask the hostess to get a bottle each time rather than walk to the fridge myself. 900+ miles and a Good trip overall.